Back at the beginning of 2016, this eight-library consortium was one of SD’s earliest BLUEcloud Visibility adopters. They’ve been with us through the entire process of building the Library.Link Network. Since their adoption, HALAN has tracked their stats using Google Analytics. Their numbers reflected a strong and steadily improving web presence. As recently as October, HALAN had an indexing rate of 10%, with 33,000 impressions, and 1,300 clicks. In November, however, things changed when the consortium implemented an update for BLUEcloud Visibility. Over the last few months, the BLUEcloud Visibility development team has been working on a significant design enhancement. In November, HALAN went live as our test site for this update. We were eager to see what would happen, and we didn’t have to wait very long! HALAN’s metrics multiplied. At the end of the month, HALAN’s indexing rate had risen to 44%, impressions had multiplied twelve times to more than 400,000, and clicks had multiplied by six to well over 8,000. 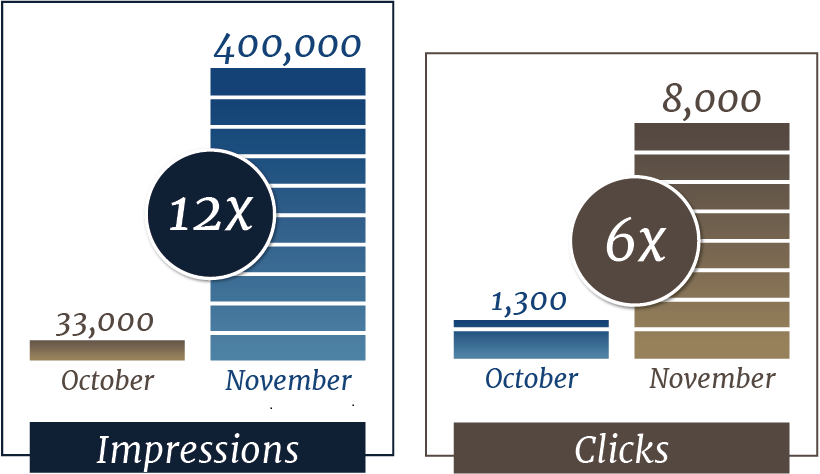 The change in numbers from only October to November was no small jump. So what made the difference?

A Change in Design
The update to BLUEcloud Visibility is known as the “library-centric” design. This library-centric design changes the search terms researchers can use to find library records. Formerly, when searching for library records on a search engine like Google, our BLUEcloud Visibility team recommended searching the item title and the library name to achieve the best results. For example, if you wanted The Time Traveler’s Wife from Orem Public Library, you would have to search “The Time Traveler’s Wife Orem Public Library.” These search terms produced good results and patrons were able to redirect to their local library from the Library.Link page. There is, however, a complication with this method: consortiums. Until now libraries that are members of a consortium have had their visibility tied to their consortium within the Library.Link Network. Users have had to enter the name of the consortium name, rather than the name of their library. So if you wanted The Time Traveler’s Wife from Port Arthur Public Library, you would have to search “The Time Traveler’s Wife Houston Area Library Automated Network,” or “The Time Traveler’s Wife HALAN.” This problem, of course, is that patrons are more likely to identify with their local library than they are with their library’s consortium (if they even know and understand the consortium system in the first place). By the old visibility design, when consortia patrons searched using their library’s name they did not receive the best results. Recognizing that patrons would want to search via their library, the BLUEcloud Visibility team had planned and prepared to provide this feature to better support consortia. How does this planning and development work? This is where Scrum comes in.

Crash Course: Scrum It
If you are not familiar with scrum, also known as Agile Methodology, the basic goal is to develop software through small and ever-improving iterations. In cyclical stages, development teams plan, design, develop, test, and release a solution. The process builds upon itself to quickly deliver a core product that then continuously improves. The beauty of the Scrum approach is that it anticipates the necessity for revision and improvement. The scrum method allows for a much-needed product, like BLUEcloud Visibility, to get out on the market and start helping libraries. BLUEcloud Visibility was released with its core functionality in place, delivering open web visibility and connecting libraries to the Library.Link Network; this was an important first step that began the crucial work of establishing libraries’ tenure on the web. After the core product is released the development team then, over time, can continue to work to develop the solution making it smoother, stronger, faster—anything it needs to be better. 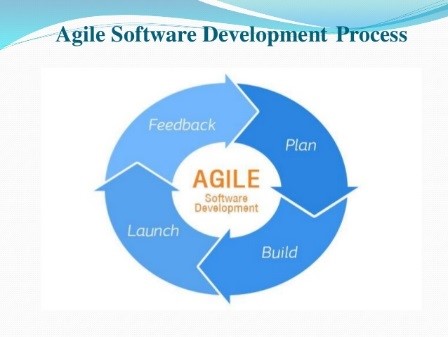 Making the Change
The library-centric design is an exciting update that meets two paradoxical visibility needs: the need for a large connected network, and the need for libraries to maintain independent, individual identities. Building on the original BLUEcloud architecture, the library-centric update maintains the large network of linked records through the Library.Link Network for a large inter-connected web of data that helps drive search engines to favor the library records in their web crawling. Now, though, the library-centric design allows for a distinct library identity, so each individual library within a consortium can have their own URL; this separate URL means users can search for a title and the name of their local library with excellent results. HALAN, our first library to be published under new library-centric design, has already found great leaps in their numbers. It’s important to note that through this change, Houston Public Library was not the only library to see gains—or even the library to see the greatest percentage of gains. The smaller libraries of the HALAN consortium saw excellent growth in their metrics. This tells us that critical mass is not a factor necessary to generate positive results from the library-centric design. The new update will be a benefit to all libraries in a consortium.
Though not all Visibility libraries have implemented the library-centric update, the update is already benefitting BLUEcloud Visibility libraries as a whole. The aggregate analytics are skyrocketing. Over the last six months, BLUEcloud Visibility impressions had an average monthly growth of 73%. From November to October, the rate of increase had doubled, with a growth of 145%, and more than 7.3 million impressions in November alone. Clicks showed similar growth with a 106% increase over October and more than 200,000 clicks in November. The numbers tell us loud and clear that the recent update is making a big difference for BLUEcloud Visibility libraries. If your library is part of a consortium, this change will be important for you. If you have not already done so, contact BLUEcloud Visibility Product Manager Justin Swain to learn what your library needs to do to implement the library-centric update. And get those numbers multiplying!